The rainy season in Nigeria usually starts from April to the end of October, it’s also called the wet season. In Nigeria, rainy season is the time for farmers to step up their agricultural activities. This is because many local farmers lack the irrigation facilities for dry season agriculture in many areas of the country. Also planting during the dry season is many times expensive. Therefore, crops adapted to this climatic condition have been widely planted.

Before the start of any farming activity, it is usually necessary to clear crop residues and dry plants before the rainy season, also it is very important to effectively prepare the land to control weeds, recover plant nutrients, and provide soft soil mass for transplanting, and also suitable soil surface for direct seeding. This simply means there is great need for land preparing before the onset of rainy season.

Land clearing can be carried out manually or mechanically. After clearing, farmers must wait until the rain starts before proceeding to the next step, which is the making of heaps, ridges or beds. However, this is dependent on the type of crops farmers want to grow. In the case of melons, farmers can plant them as soon as it starts to rain around April, even on flat ground. But for certain crops, such as peanuts, yam, and other tuber crops, land preparation is required before as well as steady rainfall.

CROPS TO PLANT IN RAINY SEASON

A large percentage of farmers in Nigeria do most of their farming activities during the rainy season, and crops such as maize, cassava, groundnut, yam, potato, rice, tomatoes, cucumber and millet are suitable for planting in any part of the country during the season.

The best time to plant cassava in Nigeria according to general practice is in April, it can, however, be extended to October. Also, planting is done either early in the morning or late afternoon when the sun is cool to prevent excess heat on the crops. Cassava production in Nigeria is extremely simple and the care is minimal, the plants only need to be watered from time to time. Cassava harvest can reach up to 50 tons per one hectare. In addition to cassava tubers, cassava green leaves can be consumed as spices.

According to the general practice, the best time to grow cassava in Nigeria is in April; however, it may be extended until October. In addition, cassava should be planted in the early morning or afternoon to avoid overheating of the stem. In Nigeria, the production of cassava is very simple and requires very little care. These plants just need to be watered from time to time. The yield of cassava can reach 50 tons per hectare. 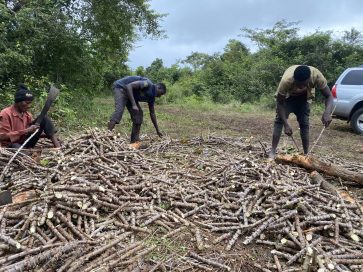 Cassava is very rich in starch, in the form of carbohydrate and it has multiple uses. It is consumed in many processed forms, and also as livestock feed. The roots and leaves of cassava are also eaten as food. In addition to cassava tubers, which can be processed into flour using different processing machines, the green leaves of cassava can also be used as a spice. Cassava is a root crop and people use the root for medicinal purposes. Cassava can be used to relieve diarrhea, sepsis and fatigue and dehydration of people who give birth.

Maize is one of the most valuable food product that is geographically distributed in Nigeria, and suitable for most Nigerians. It is perhaps the most common staple food in developing countries, for people earning less than 1,000 naira a day. The world’s consumption of maize exceeds 116 million tons, and this proves that globally, maize consumption is very high. In sub-Saharan Africa, 50% of the population consumes maize, and the entire African continent accounts for 30% of the world’s maize consumption.

Maize in Nigeria is mostly planted during the wet season, early corn varieties are sown in May/June and March/April in the north, while late corn varieties are sown in August. Due to the irregular rainfall caused by climate change, farmers are often encouraged to plant at the beginning of the rainy season. The corn matures quickly within 3-4 months after sowing and the crop is ready for harvest, depending on the stage you want to harvest, but the early corn harvest is done in May and the late corn harvest is in October.

In Nigeria, maize cultivation does not require too much training and funding. Once there is suitable land, irrigation systems, maize seeds and grain storage, corn production can begin. As one of the main food crops in Africa, corn can be consumed in various ways, such as corn flour, Semolina (swallowed with soup), corn beef, feed mill (used for animal feed), roasted corn, cooked corn or even made into corn porridge. Throughout Africa, green (fresh) corn is cooked or grilled on and served as a snack.

Groundnut is a crop that has a very high demand because of its usefulness in our economy. Groundnut is useful in so many ways, it can be eaten (as fried, roasted or boiled), groundnut oil, making groundnut cake, feed for livestock etc. Groundnut only takes about three (3) – four (4) months to mature. Another benefit of planting groundnut is that it can be cultivated two (2) times in a farming season.

Rice can be grown anywhere, which means that rice can be grown in all geographic areas of Nigeria, depending on the variety. Studies have shown that Nigeria’s rice arable land is relatively small, about 2 million hectares, with a potential of 5 million hectares. Remember, the best time to plant rice is from mid-March to mid-April. Rice can be harvested three to four months after planting. When the plant changes from green to brown, your rice is ready to be harvested.

Yam is considered to be the most important staple food in West Africa, and 70% of the world’s total tuber production is produced in this region. Festivals and ceremonies are held in different places in the area every year to commemorate the arrival of new yam. In addition to these festivals, yam farming is very profitable. 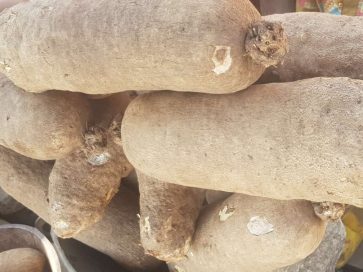 Five hundred by five hundred meters size of farmland produce 50,000 tubers, which is worth N10 million (approximately US$50,000) at the price of one dollar per root. In West and Central Africa, yam tubers are planted between February and April, depending on whether they are in wet forests or savannas, and harvested after 180 to 270 days. Care must be taken when harvesting to reduce damage to the tubers, which can cause rot and decrease in market value.

In Nigeria, one of the seasons mostly utilized for farming is the rainy or wet season, this season usually spans from April to October. For many farmers in Nigeria, rainy season is when they are usually eased of the stress having to provide irrigation for their farmland and crops manually. And among the many crops that can be planted in this season, Farmsquare recommends the cultivation of Cassava, Rice, Maize, Yam, Groundnut among many others, and the reason is not too far fetched, these crops are highly profitable crops, and also requested in high demand globally.