Fire destroys yam barns in plateau state. Millions of Naira were lost to a sudden fire outbreaks in Plateau State, with fire engulfing at least three yam markets in different parts of the state, many farmers and traders are now suffering huge losses. Traders’ main livelihoods were burned to death in the affected markets, and they now find themselves in financial trouble, unsure of how they will survive next.

The strange fire which started in the communities of Pangkai and Kalong Yil, affected many yam sheds which were completely demolished. Before the fire incident, the farmers and traders had returned home that night, and for this reason there were not enough people to put off the fire which eventually spread to other agricultural communities, where farmers stored their produce in barns built of hay. 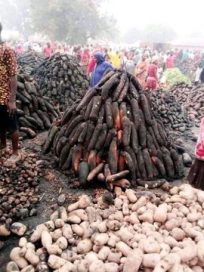 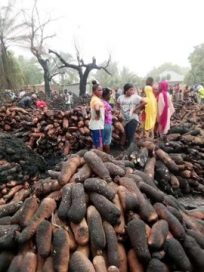 While the farmers in Pangkai and Kalong Yil communities were mourning their losses, news got to them that the Namu Central Yam Market in Qua’an Pan, another local government area in the region, was destroyed by fire, destroying thousands of yam tubers worth millions of naira in the process. The incident was a major disaster for traders, as that market was one of the main centers for selling yam to Nigerians and foreigners in the state, and it was still a gathering place for the state’s food supply.

According to Mr Emmanuel Ntiem, a large Pangkai yam trader in the Mikang local government area, whole barn was destroyed by the fire, Mr Ntiem explained, when I was called and told that my barn in Pangkai, a village near Garkawa where I live, was on fire, I was about to go to bed and could not move from my home to the market to save anything in the barn. The community was plagued by long-term water problem, hence it was very difficult for people in the neighborhood to put off the fire, they tried to use sand and after great efforts to put out the fire, the fire was eventually extinguished but it was too late as everything stored in the barn was burned to ashes. That night, I could not sleep because all my investment had burnt to ashes, Ntiem revealed. I arrived in town very early the next day, I can’t remember what I did because I have not recovered from the extent of the loss. The yam for sale, the ones stored for our consumption and the seedlings of this year’s farm have all been burnt to ashes. He said I don’t know from where to start, I am asking for help from people so that I can bounce back.

Another victim of the fire incident, Bali Monday, described the incident as the “worst time” for his colleagues and called on the public to help them because some of the traders and farmers were already admitted to hospital due to depression obtained from heavy financial loss. According to their estimates, at least 200 traders were affected by the fire outbreak, and the fire also destroyed at least 1,000 thatched-roof yam sheds. “I call on governments at all levels to help us because this destruction is huge; he said, this is our only means of survival, and we have no other business other than selling yam.

Another victim, Kabiru Umar blamed the hay used to cover the tuber shed and added that the fire could not be controlled due to the increase in high temperature in the dry season. “We want the government to help us. The poor helped them when they needed votes. Now we need them to help,  he said, the government must help us get rid of this problem.” Another victim, Langkuk Benjamin, also calling for help said: “Millions of naira have been lost, and some were borrowed with interest.” Professor Nora Dadu’ut, the Senator who represents the Southern Plateau Senate area, expressed sympathy for the entire community, especially the victims of the fire incident. She said she regrets the incident. She said “I commiserate with the entire people of Namu over this sad incident. Since I heard of this incident, I have not been my usual self, I feel very sad. I pray to God to revive the spirit of those affected by this incident. May God give them the grace to accept the loss and continue the struggle.”

Read through the other NEWS…

Farmsquare Posted on November 23, 2022
Lagos Explains The Benefits of Selling Rice And Vegetable Oil To Consumers Directly The Lagos State Government has stated [...]

Farmsquare Posted on November 21, 2022
Nigerian Ginger Can Compete Favorably In Global Market Nigerian ginger must be produced without alfatoxins, which are the most [...]