Maize farming is a vital activity that produces maize cobs/grains, one of the most important food crops in Nigeria. Maize is popularly cultivated in the country and can be planted anytime of the year. It’s almost impossible not to consume maize and its derivatives in 72 hours. Maize and corn are same, just that “Maize” is commonly used by the British and “Corn” by Americans. Gardening Channel gave comprehensive differences between Maize and Corn. Despite the acceptability, usefulness and popularity, the yield per hectare is still low in Nigeria.

Make sure you read every bit of this guide to know the simple and easy to follow steps on how to increase your maize production.

Your questions on; How long does maize take to grow? What is the best time to plant maize? How many times is maize planted in a year? Is maize profitable in Nigeria? How profitable is maize farming? How much fertilizer do you need per acre of maize? Which fertilizer is best for maize? etc will be simplified here.

WHY YOUR MAIZE YIELDS ARE LOW?

1. The maize varieties
There are several varieties of maize seeds around. But they are generally grouped into two, Hybrid and Open-pollinated maize varieties (OPV). Examples are Dekalb 920 F1 (Yellow), Dekalb 777 & 234 F1 (White), Sugar King F1, Golden Bantam, Maize Hybrid Seeds Variety (SC 510), Honey King F1 etc. We advise you plant improved varieties that combine drought and striga resistance, with higher yield potential and adaptable to your zone. We also recommend you obtain certified seeds from seed companies, their agents and associations. Try and avoid selected or leftover grains from your last harvest for planting.

2. Leaf eating caterpillars insecta (Lepidoptera)
The common leaf eating pests of maize are Faw Army Worm (FAW) and grasshoppers. FAW is highly destructive. The larvae can destroy more than 340 plant species with maize being the most susceptible. Research shows that about 17.7 million tonnes of maize are lost in many African countries yearly because of FAW. More of its activities have been detected in Oyo, Ogun, Abuja, Nigeria. It prevention usually involves the combination and usage of multiple types chemical formulations. 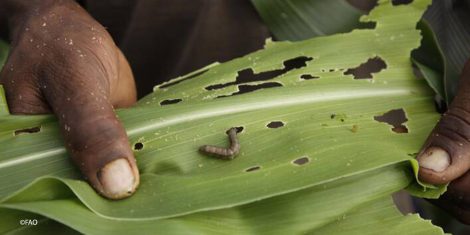 How to prevent them from damaging maize;
– Deep ploughing before planting to expose and kill the pupae present in the soil to avoid future infestation.
– Maintain proper spacing, hygiene and weed free in the field.
– Avoid water logging and avoid water stress during flowering stage.
– Set up light traps to kill the moths during night.
– Install pheromone traps @ 9 – 10/acre to attract male moths.
– Grow castor along the border as a trap crop/barrier crop.
– Collect and destroy egg masses in the castor and even in tomato.
– Hand pick grown up larvae and kill them.
– Intercropping with Cowpea, Onion, Maize, Coriander, Cassava.
– Grow Basil which acts as repellent crop.
– Release predators Chrysoperla, coccinellid beeteles, dragon fly, robber fly, praying mandtids, etc.
– Erect bird perches @ 20/acre for encouraging predatory birds such as King crow, Common mynah, etc.
– Attack should be controlled by applying 1.68 kg active ingredient of Vetox® 85/ha, i.e., 3 standard match box filled to the level per 4.5 liters (1 gal.) of water. Two applications, the first at 2 weeks after planting, and the second 2 weeks after.
– Spray monocrotophos (Azodrin® or Nuvacron®) at the rate of 28 ml/10 litres (2 gals) of water when there is an attach.

We Handpicked These For You;
New Tela Maize Variety Approved For Cultivation – FG.
Lagos State Partners With Maize Farmers.

3. Low soil fertility
The soil fertility and capacity of many areas in Nigeria are gradually decreasing. Some of the reasons are rapid population growth that puts pressure on land resources. Depletion of soil in macronutrients such as N, P and K, as well as important micronutrients eg copper and zinc etc. So the ground cannot support maize cultivation without adequate application of fertilizers. It’s almost impossible to attain above 1 tonnes/ha without adding fertilizers.

4. Seed viability and treatment
It’s essential to test the maize seed for viability before deciding to plant. Make sure the maize seeds you’ll be planting are well treated with appropriate chemical (powdery in nature) to foster germination. If not, your seeds will be attacked by diseases, pest, birds, even human activities on the farm before and after seed emergence. Many of the chemicals (eg marshal 2% ash) are red, green or pink in colour. For seeds upto 5kg, you will need upto 10g pack of the powder chemical you’re using for treatment. Shake continuously till you notice the seeds are well coated with the powder chemical. Hybrid maize seeds are treated already to save you the stress.

5. Fertilizer application
Application of fertilizers are done based on the soil nutrient capacity. For high maize yield, you can apply 100kg N, 50kg single super phosphate and 50kg muriate of potash. We recommend you split the application. The first split: apply 6 bags (300kg) of NPK 25:10:10/ha within 1-6 days of planting. While the second split, apply about 2 bags (100kg) of urea within 4-5 weeks after planting. Weed before fertilizer application at any split. Ensure it’s about 7 cm away from your maize plant. Don’t exposed fertilizer on the soil surface. Always cover applied fertilizer with soil. 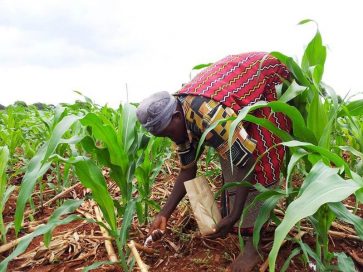 6. Maize diseases
Whether soil-or seed-borne diseases, treating the seeds prior to planting easily controls most diseases. A few pests such as stem borers, and grass hoppers occur occasionally and rarely present any serious challenge. Plant maize early to minimize attack by disease and use recommended varieties that are known to be resistant to the most important diseases. Weed when necessary.

WHAT TO DO TO BOOST YOUR MAIZE PRODUCTION

1. Weed control
It’s no brainer that weeds often compete with crops for nutrients, sunlight, water etc. Good weed control in maize production is a prerequisite for high yields. This is one of the sure ways of cultivation to reach its full potential in the field. In many parts of the Nigerian savannah, striga is a notorious weed that pose a major threat to maize farming. Apply manual and chemical control methods to manage weeds on your maize farm. It is recommended to do two manual weeding at 2 weeks and 4-5 weeks after sowing. Good soils can increase the effectiveness of herbicides.

To control weeds with Primextra Gold, apply 250-300 ml for 15 litre sprayer and spray farmland immediately after planting or a day after.

To control weeds with Glyphosate, apply 350 ml for 15 litre sprayer before land preparation.

To control weeds with Atrazine, apply 2.5-3 kg of powdered atrazine (i.e 400-500 ml for 15 litre sprayer) immediately after planting or the following day after planting. Dissolve atrazine powder in clean water before use at the rate of 1 kg in 1 liter of clean water. Do not apply atrazine if you intend to intercrop the maize crop with legume crops (cowpea, groundnut and soybean).

Don’t Be Left Out On These;
How Lagon Herbicide Increases Production & Profits.
FG Praises Increased Production Of Maize.

2. Land preparation
Many are not aware that maize yields are not affected by zero tillage. However, a well prepared ridges should be made as soon as the rains start. To increase maize production, maize should be cultivated on a well-drained, deep friable soil with ridges of 75 cm apart.

3. Required Temperatures
Maize crop needs above 19°C and the average night temperature should also be above 14°C during the growing season. During germination, the ideal temperature seems to be around 18°C.

4. Time of Planting
The weather is almost unpredictable but maize seed should be planted as soon as the rains become steady. Before, It was around March/April in the rainforest areas, and month of May in the southern guinea savanna areas. Now, with irrigation facility, you can plant anytime of the year.

5. Seed rate and planting
There are two major ways to plant and space you maize seeds; i) you can plant 2 seeds per stand at 90 x 45 cm to get a population of 48,000 plants per hectare. This is recommended if maize will be intercropped. ii) you can plant 2 seeds per stand at 75× 50 cm. This is recommended for sole cropped maize. For a hectare, about 15-20 kg of maize seeds is required. Some people plant 3 seeds per hole and thin to 2 plants about 14 days after germination.

6. Harvesting
Once it’s about 60-70 days after planting, maize is ready for harvest. Use the appropriate tool or machines to carry out harvesting. But if you planned turning to grains, leave it for about 90 to 110 days after planting. You can also dry in a traditional ventilated granary. 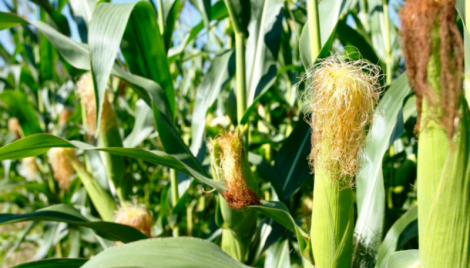 7. Marketing
Maize production level in Nigeria has gone beyond local consumption. The demand for maize and it derivatives in the poultry industry as well as population increase has cause a surge in production. Maize farmers are advised not to sell immediately after harvesting periods as prices are lowest at this periods. Farmers are to sell when demand is high for more profits. There are many buyers from Benin, Republic of Niger, Chad and Nigeria willing to buy. All things been equal, you will likely make lots of profits around August yearly and more in dry season.

8. Maize Storage
If you plan to store your maize, ensure you dry to about 10% moisture content. Harvest when reasonably dry and store in an environment that allow cross air movement to continue the drying process. Wherever you plan storing must be clean to prevent pests like weevils. For storage in cribs: Protect maize cobs with Actellic® at the rate of 1 part Actellic® to 5 parts of water, or 20 kg Actellic® (2%) dust/kg cob. In the silo or any other air-tight containers: Dry grains should be protected with Phostoxin™ or Detia™ at the rate of 1 tablet/25kg maize (or 50 kg maize).

CONCLUSION
Maize farming is now cultivated throughout the year because of irrigation system. Ensure your land is properly prepared at the appropriate time to receive viable maize seeds. You are to cultivate recommended varieties for your zone. Use correct spacing when sowing. Apply fertilizer according to soil test result, follow the recommended agronomic practices and use treated seeds from a certified company. Plan for marketing, processing and storage from the beginning to prevent wastage and maximize profit.

How long does Maize take to grow?
Averagely, it takes about 60-100 days to reach harvest. This depends your weather and the variety you use. The litmus test for harvest is when kernels are soft and plump, ears turn dark green, kernel juice will be milky and silks turn brown.

What is the best time to plant maize?
Maize farming is now cultivated throughout the year because of irrigation system. The optimum planting date is between mid March and May.

How many times is maize planted in a year?
You can grow 2-3 times a year because both short and long duration varieties of the crops are available.

Is maize profitable in Nigeria?
Because of it usefulness, maize farming in Nigeria on a commercial level is highly profitable. It takes about 2 and half to 3 months for harvest. You can get upto 50% return on investment (ROI) or more within few months if done properly.

What is difference between maize and corn?
Maize and corn are same just that “Maize” is commonly used by the British and “Corn” by Americans.